It’s been almost one and a half year since my last post with this keyboard. A few things has happened since then, so I thought it was time for a new post about the changes. 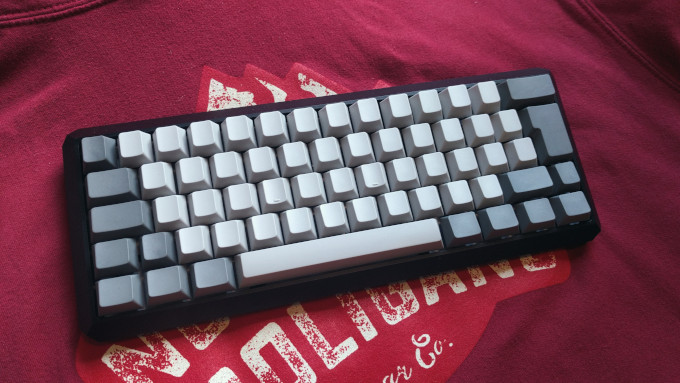 I had issues with my Tealio switches becoming unnaturally scratchy. I tried solving it with lube—which helped a bit—unfortunately it didn’t solve the issue. I wanted to try a new layout and replace the old horrible “genuine” stabilisers from Cherry anyway, so I decided to start fresh!

I don’t own any good desoldering equipment, but a friendly stranger from the Swedish keyboard community offered to help me with it for free. I did offer him money, but he didn’t want any. :)

I used to have “end game” Tealio switches with custom gold plated 60 grams springs from SPRiT, lubed with Tribosys 3204. They ended up being a bit more expensive than I had planned, but this was my first attempt at my “end game” keyboard and I kept telling myself it was okay.

Lubricating switches was the most boring thing I have ever done in my life. I’m normally a patient person, but this was too much even for me. Swapping the springs took some time as well, but at least it didn’t require much effort.

When it was time to pick new switches I decided to go with regular stock Gateron Red switches. They’re good enough, cheap and comes with light springs that I’m okay with.

Fun fact: I actually paid more for the old custom springs alone than what I paid for the Gateron switches. :|

I bought the first stabilisers from an American vendor a long time ago, who claimed that they where “genuine” and not some cheap knockoffs from China (poor knockoffs is a common issue). I’m not sure what to believe, but I had major issues with them being rattly and popping off every time I removed a keycap. And it was a pure hell getting them back once they where loose.

This time I bought GMK screw-in stabilisers from a trusted guy via Reddit. What’s different about these is that you screw them to the PCB! They’re really not going anyway this time!

I also applied some thick lube from Super Lube on the parts where metal parts meats the plastic. The result is night and day in comparison from my old Cherry stabilisers. I’m really happy with the result!

I removed the plate

I also decided to skip the commonly used switch plate. Aluminum is fairly soft, but I always felt that it was still a bit too harsh to type on for my fragile fingers. :)

I’m really happy with how it turned out. The change is subtle, but it’s noticeable and I like it!

I was also curious about trying a new layout. I wanted to split both the Backspace-key and the right Shift-key, as well as changing the bottom row to a classic UNIX bottom row and trying an ANSI Enter-key.

All mentioned changes are marked in blue here:

And for reference, this is the default 60% ISO-layout:

I didn’t like it at all. The longer spacebar threw me off completely and I also had issues reaching the AltGr-key—a key that I didn’t knew I was using as much as I did. The split Backspace-key was a nightmare to use as well. I grabbed my soldering equipment and changed the layout to this:

After about a month of using the ANSI Enter-key I decided that it wasn’t something for me after all. Sure, it might be closer to my pinky finger, but it’s still awkward to reach. I had to bend my wrist at a way more sharper angle which made it hurt after a while.

After one final adjustment to the layout and I’m now back to a pretty much standard ISO-layout. I kept the split right Shift-key to avoid one extra stabiliser. I haven’t really found a good use for the extra key yet. It currently functions as an extra Delete-key, but I rarely ever user it.

If you want to leave feedback you can do so by sending me a message via e-mail.